back to member's page

Speaker of the House 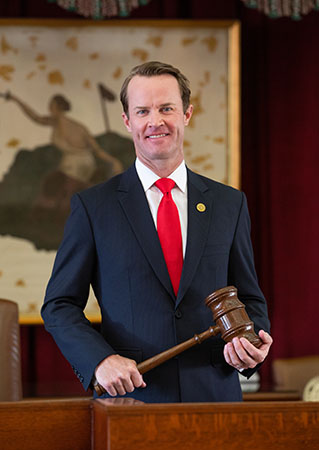 Welcome to the official Website of the Texas House of Representatives.

Thank you for visiting the official website of the Texas House of Representatives. Whether you're seeking to contact your state representative, catch up on news from the Texas House, or learn more about the legislative process, you've come to the right place.

Democracy is at its best when Texans like you are a part of the process. By visiting this site you've taken a more active role in your state government, and we hope it will prove to be a valuable resource.

Dennis Bonnen
Speaker of the House

The Honorable Dennis Bonnen was sworn in as Texas Speaker of the House on January 8, 2019. Elected to the post by his colleagues, Speaker Bonnen has set an early tone for unity among the House Chamber by empowering Members to work together to achieve meaningful results that address the state's most pressing issues. Speaker Bonnen believes in productive, efficient government that remains accountable to Texans while casting aside politics in favor of finding real solutions.

Speaker Bonnen has served in the Texas House of Representatives for over 20 years, representing the 25th House district that encompasses southern Brazoria County and the entirety of Matagorda County. First elected to the Legislature at the age of 24, Bonnen joined the House in 1997 and began his twelfth term of office in January 2019.

Speaker Bonnen was born and raised on the Gulf Coast and resides with his wife, Kim, and their two sons in Lake Jackson, Texas. While at home in Brazoria County, Speaker Bonnen is deeply involved in his community, serving as honorary chairman of Brazosport College's "Count on Us" campaign, on the Board of Directors for Junior Achievement and B.I.G. Love Cancer Care Services, and as an honorary member of the Brazoria and Matagorda County Cavalries. He has served as honorary co-chairman of the Leukemia Society Light the Night Walk and Crime Stoppers Golf Tournament, and is an active supporter of the Brazoria County Fair, BACH, Boy Scouts and Girl Scouts, ActionS, Inc., and local Boys and Girls Clubs. As a lifelong champion for small businesses and economic development, Speaker Bonnen is proud to be a member of the Angleton, Brazosport, Sweeny, West Columbia, Brazoria, Bay City, Matagorda, Palacios, and Sargent Chambers of Commerce.

In addition to his legislative duties, Speaker Bonnen is the CEO and Chairman of the Board of Heritage Bank. In 2009, the Houston Business Journal honored him with one of the inaugural "40 Under 40" awards.

As presiding officer, the speaker maintains order during floor debate, recognizing legislators who wish to speak and ruling on procedural matters. The constitution also requires the speaker to sign all bills and joint resolutions passed by the legislature. As a member of the house of representatives, the speaker may vote on all questions before the house.

The other duties and responsibilities of the speaker are determined by the members of the house in the House Rules of Procedure, which are adopted by a majority vote of the members at the beginning of each regular session of the legislature. The members give the speaker the authority to appoint the membership of each standing committee, subject to rules on seniority, and to designate the chair and vice chair for each committee. Under the rules, the speaker is responsible for referring all proposed legislation to committee, subject to the committee jurisdictions set forth in the rules. The rules also allow the speaker to appoint conference committees, to create select committees, and to direct committees to conduct interim studies when the legislature is not in session.